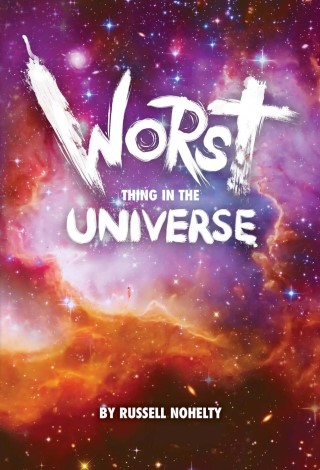 Worst Thing in the Universe

Albert Ross is the most miserable, pathetic, and terrible thing in the entire universe. He is reviled by many, most of all God

Albert Ross is an anomaly. Karma doesn't think anything he does is wrong. It's a glitch in the universe that God can't fix. Every trillion or so births in the universe, there is a karmic anomaly

It's unkind because of Albert Ross.

That is the crux of the karmic anomaly. Karma thinks everything that Albert Ross does is actually carried out by Vikram Suresh.

What a horrible lot in life.

That's why Vikram kills himself. It usually doesn't matter when a poor, miserable schlub dies, but this death has instant ramifications.

With his death, Karma can instantly see Albert Ross again and realizes its mistake. Like a rubber band, all the horrible things that Albert's ever done slingshot back to him at once.

And God watches with glee as karma has its revenge.

Worst Thing in the Universe is narrated by God, as he pontificates on the horrible fate of Vikram Suresh, expounds on the nature of the universe, and explores the flaws in the whole system.