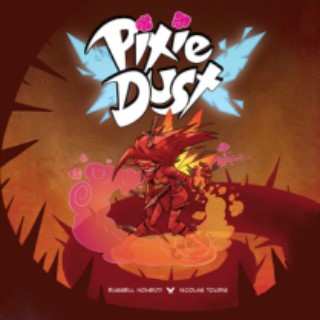 What would you do for revenge?Akta is the greatest monster hunter in all of King Odgeir's kingdom.She's smart, fast...oh and she's also a pixie, a magical race that can disappear and reappear at will using magical pixie dust.King Odgeir is obsessed with using Akta's pixie dust to create a race of super soldiers, but Akta refuses to give it up, so King Odgeir poisons Akta and takes it for himself.Akta, however, vows revenge and makes a deal with Velaska, the queen of the underworld, so she can return to Earth and seek revenge on the king that killed her.The only problem is that time moves differently on Earth than in Hell, and when she returns to Earth her body has been decomposing for a week.Now, she must kill the king before her body falls apart, or risk spending eternity in Hell.This beautiful, full-color graphic novel is a fast-paced action-adventure, but it's more than that, too.Moreso, this is my treatise on "the other". Akta has spent her life killing monsters, but once she becomes one after returning to Earth, she starts to see how monsters are treated and come to realize that her whole life might have been a lie.If you are a comics fan, I think you will enjoy the beautiful art from Nicolas Touris and the incredible speed at which the story moves.If you aren't a comics fan, I think you will enjoy the novelistic and allegorical layers in the book which touch on race, prejudice, and humanity's treatment of the other.