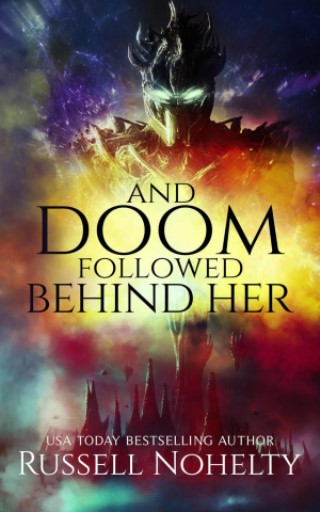 And Doom Followed Behind Her

This boxset collects the first three books of The Lobdell Chronicles.

Every Planet Has a Godschurch

Demons fought with us.

Now, they live among us.

Now, they rule us.

I work for one of them as a hired assassin. I hate the work, but it's a better life than most.

The only thing that keeps me going is my hatred of the gods that allows monsters to escape Hell to begin with...

...and left us to pick up the pieces.

The Horde was bad, but at least they would have vaporized us quickly, not kept us as slaves. Luckily, a new contract just came across my desk. The chance to kill a god.

She deserves to die, and I'm going to put a bullet right between her purple eyes. It won't make my life any better, but at least it will give me some satisfaction, at least for a moment, and that's all you can hope for in this crazy, mixed up world.

If you love mythology, space opera, and edge of your seat thrillers, then this book is for you.

There's Every Reason to Fear

The gods are being hunted.

The Godless are winning.
I've hunted them across the galaxy, but every time I take down one Godless cell, three more take their place. They are relentless, determined, and pissed off, but they are also wrong.

The gods are scared. They have never worried about death before, and now death lurks around every corner. I've protected them as best I can, but my best hasn't good enough.

If you love portal fantasy, subverting mythology, and magic, then you'll love this book.

Its members have scattered throughout the galaxy.

There is no hope left.

The Godless have kept us on the run since destroying our base two years ago. We've hopped from planet to planet, trying our best not to be wiped out.

Now, we finally have a lead. We know where they've moved their base, and we're ready to mount an attack.

But we have to take our shot.

It's the last one we might ever have. If we don't stop the Godless now, there will not be another chance.

It's all or nothing, and the odds are stacked against us.

If you like reinterpretations of mythology, non-stop action, and exciting battles, this is the book for you.

Three books in one!